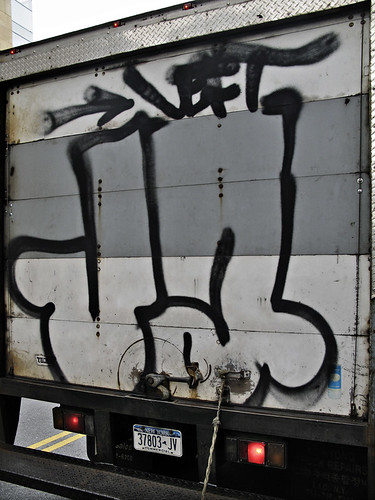 There, at the side of the Long Island Expressway, on a retaining wall of Calvary Cemetery in Woodside, is one of the more significant graffiti tags: JA.

It’s not especially fancy or artistic, but it is a reminder that JA – J***** A***** – is still out there, leaving his mark and reaffirming his reputation as perhaps the city’s most elusive tagger.

"He’s tough," says a police source familiar with JA. "He’s not always out there. He’s not easy to find, not easy to catch. He’s like a ghost."

While graffiti still is scorned by public officials, it is increasingly part of the cultural mainstream, and JA, 38, remains one of the city’s most prolific taggers and possibly its most interesting case study.

JA himself is no stranger to Hollywood, with a handful of minor roles on television and in films, including "The Karate Kid Part III" and "Rocky V," both directed by his dad. In "Rocky V," JA plays a drug addict – a case, police sources say, of art imitating life, as drugs have long been JA’s problem.

That might explain why he is said to be estranged – or at least not all that close – to his father. Father and son made headlines in 1989 when JA was sued by the city for tagging subway cars and signs along the Henry Hudson Parkway.

Police sources remember the Koch administration picking on JA because of his father’s celebrity. When David Dinkins became mayor, the city decided it wasn’t worth it to sue taggers for damages. In the JA case, however, a settlement was reached, with police sources recalling the father paying at least $10,000 for the son’s sins.

If JA learned his lesson, he has a funny way of showing it. Police sources suspect JA has thrown up thousands of tags, causing an untold amount of damage. Like virtually every tagger out there, JA loves the fame, underground though it may be, that comes with tagging.

"He is a big deal," says retired NYPD Lt. Steve Mona, who headed the Vandals Squad, tracking and arresting taggers. "There’s no doubt about that. He’s been around a long time, and he’s survived in a subculture for a lot longer than other people in the same subculture.

"He’s the type of guy where, if he had a gallery opening, other people in the subculture would go to see."

So JA, like his dad, has his fame. But he’s still not talking, at least not to Newsday, putting out word through several intermediaries that he’s not interested in an interview.

He is not without his opinions. In "State Your Name," the DVD that serves as a sort of ode to graffiti, a shirtless JA wears a Nixon mask and, affecting an Asian accent, explains how he got hooked on graffiti. It’s either incredibly juvenile or too cool for anyone older than 30 to understand.

Back in 1995, he told Rolling Stone about the "kind of euphoria" he feels when tagging. He also talked about wanting to quit.

"Here’s a kid who on his father’s name probably could have done something in Hollywood," he said. "Instead, he just sticks with this, and like anyone else in the subculture, he can’t stop doing this."

JA isn’t bulletproof, however. He has been arrested a dozen times or so since the late 1980s, serving bit stints in jail, with two months in any one case being the most. He was last arrested in January 2005 in Queens, pleaded to criminal mischief and was conditionally discharged. It is somewhat surprising that someone so productive has so few arrests.

His elusiveness, sources say, is easy to explain. His tags are just that – not fancy murals – and take little time to produce.

He’s also difficult to track. He has a Queens address, a Westchester address and a Los Angeles address. He’s around – then he’s not.

More recently, though, he seems to be back in the mix. His fresh tag has appeared in several locations, including the Tillary Street exit of the Brooklyn-Queens Expressway and the roadway of the Triborough Bridge.

As timing would have it, graffiti is back in the news.

Last Thursday, authorities on Staten Island met to discuss a surge in graffiti on park benches, buildings and other property.

The next day, A***** M******, 36, the tagger better known as KET, showed up in court in Brooklyn and listened to a judge order him to pay more than $3,000 in restitution for defacing subway cars and buildings in that borough.

M***** previously had pleaded guilty to graffiti charges in Brooklyn, Queens and Manhattan. All told, he has to hand over more than $12,000 in restitution and fines. His arrests are no small victory for police and prosecutors in their fight to eradicate graffiti.

For KET and JA, and others in the taggers’ world, such publicity only adds to their legend.

To finish activating your account, check your inbox for our Welcome message and confirm your email address.